Introducing the MFA|EDA Class of 2022

Please join us in welcoming the incoming Class of 2022 cohort of Duke University MFA in Experimental and Documentary Arts.

Born in 1987, Matthew Barbarino grew up in Binghamton New York, an area heavily effected by the decline of American manufacturing and the emergence of widespread opiate addiction. After graduating high school, Matthew spent several years working odd jobs before finally being accepted to the Rhode Island School of Design to study photography in 2015. Soon after graduating, his series ‘Graceland,’ a documentary portrait of old friends still grappling with addiction in his hometown, was picked up by photographer Danny Lyon and was the subject of a solo exhibition in British Columbia.

Lily C. Frame was born and raised in Charleston, West Virginia. She earned her bachelor’s degree in Film Studies at the University of North Carolina of Wilmington in 2020. Although Frame has no formal art training, she dabbles in dance, photography, experimental filmmaking, film theory, film festival programming, collage-animation, scan art, performance art, and installation. Through the merging of dance and filmmaking, Frame creates subjective cinematic dances that aim at expressing her desire to be seen, heard, and felt. Her work revolves mostly around the here and the now, the human experience, the natural world, and contains stories that distill her life, autobiographically, and explore familial trauma. Curiously, her work investigates the recurring tendency in recent history to connect creativity with mental disability and illness.

Marie A. Gayeski holds a BFA in Communication Design from Parsons School of Design, a BA in Political Science and an MPA in non-profit management. In addition, Ms. Gayeski attended Brooks Institute of Photography. She has worked in museum development and as an intellectual property licensing contract manager. Her work focuses on the natural environment, human and animal formative experiences, mental health, and support for US military spouses. She is most interested in documenting trauma caused by natural disasters and exacerbated by ineffective government response.

Emma Geiger was born in Maryland and raised in Hopkinton, New Hampshire.  In 2017 she graduated from St. Lawrence University with a degree in Creative Writing and in 2018 she studied film and photography at the Salt Institute for Documentary Studies in Portland, Maine where she began making short films in addition to storytelling through photography.  Since then she has worked with documentary photographer Matt Black, as an assistant teacher for photography at Maine Media Workshops, and at film festivals including Sundance, Tribeca, and Camden International Film Festival.  Through her work in video and film photography, she seeks to explore how we can evolve within the medium of visual storytelling to engage with and challenge our understanding of human experience.

Born and raised in Hangzhou, China, Taoyuan graduated from Emerson College with a Bachelor’s degree in Visual Media Arts and a minor in Photography. After graduation, she moved to Los Angeles with a festering ambition in film and media. Taoyuan aspires to make work that reconstructs memories and moments, for a lost past, the distractions of life & the perseverance of hope. She cares about the curbside perspective and the unforced beauty in intimacy and trauma. In Los Angeles, she interned at Girl Culture Films founded by filmmaker Lauren Greenfield and worked as a production assistant at a commercial photography studio, as well as freelanced on various production sets.

Emily MacDiarmid, born in Reno, Nevada, graduated in 2019 with a BA in journalism from the University of Nevada, Reno. While pursuing her undergraduate degree, she quickly developed an interest in media studies research and documentary video. She traveled around the western states, exploring themes of social norm contestation and community relationships through her projects. Her work has been recognized by the International Congress of Qualitative Inquiry, Nevada Humanities and the International Academy of Digital Arts and Sciences.

Shirin Maleki is a multimedia visual artist born in Tehran, Iran interested in experimental storytelling. She graduated from the School of the Art Institute of Chicago in 2018 where she was able to combine her passion for interdisciplinary fine art by using photography, poetry and animation in the Department of Film, Video, New Media and Animation. Her work often has an implicit connection with nostalgia and Anthropocene invoking a vast range of color and light and sparking ideas about childhood, nature, connection and change. She is interested in the potential of animation as a part of interactive installations to provoke action in the comfort of “unreal” highlighting the difference between real and unreal, real and surreal and their complicated connection with perception and representation. 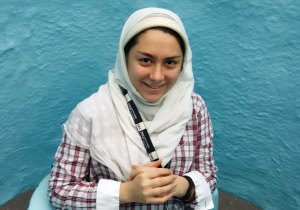 Ivy Nicole-Jonet is a recent 2020 graduate of the University of Pennsylvania. Ivy is passionate about social change and social justice and expresses this through films, graphic design, and animation.

Growing up in Washington, DC, and experiencing the gentrification of Southeast DC, Ivy has the first-hand experience in the ways gentrification profoundly disrupts, disregards, and dishevels Black communities. As a student at Penn, Ivy has witnessed the disconnect between the Penn community and the West Philadelphia community. This disconnect reminded Ivy of growing up in DC and has inspired her to delve into documentary filming and animation as a medium to express this disconnect. By creating documentaries with the inclusion and cross-discipline of digital media and animation, Ivy hopes to engage the nation in a discussion about socioeconomic inequality.

Born in 1994, Nathan Borradaile Wright grew up in New Jersey. Following his graduation from high school, he entered the Rhode Island School of Design, where he studied glass. His work explores our interface with the material world and the shifting network of relationships that scaffold the everyday. He has spent the last three years working as a freelance artist and fabricator.